Sandisk did a great job with their presentations at Storage Field Day 5 (which is where the SFD5 group photo was taken), so I’m looking forward to seeing what they have to say that relates to data. Sandisk are primarily a flash storage company, and I gave a potted history… Read More 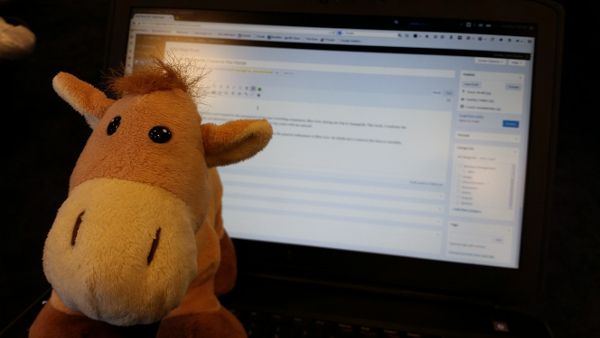 Those who follow me on Twitter were treated to the perspective of my new travelling companion, Blue Cow, during my trip to VeeamON. This week, I continue the tradition. Alas, Blue Cow was not allowed to join me, so Clarence the horse has come with me instead. Clarence is a… Read More

I was invited to Storage Field Day 5, held in San Jose, California USA in April 2014. I also attended the Software Defined Datacenter Symposium on 22 April 2014, and was part of the CapEx vs. OpEx panel. Pre-Work Here are my preparation posts in the lead up to the… Read More Sandisk are the other public company presenting at Storage Field. Their financial statements tell a very different story from those of EMC that we discussed previously. Check this out: That’s a pretty bumpy ride through the GFC. Here’s what it did for investors, in terms of Return on Equity: Ouch.… Read More

This is my last revised list for the Hottest 100. This list is generated using a more sophisticated method (yet again) after a discussion over Twitter I had with @chrisjrn about the kinds of bias there might be in the sample. I refined the list with three techniques. Firstly, I… Read More

I’ve done another couple of data matching runs, and I think I might have a more accurate one than the previous list. There are a couple of significant differences, which I think is due to the way the partial matching Nilsimsa hash works. Basically I’ve tuned the Nilsimsa hash cutoff… Read More

I’ve replicated the methods used by the Warmest 100 crew to check their results. I managed to collect 15,588 total votes compared with their 17,800, so my list will be slightly less accurate, thought I’ve used a slightly more complex matching technique than what @flossinspace did, so that might help… Read More

Disclosure: I was sent this product by MobileZAP.com.au. A couple of months ago, I was sent a Stick-N-Find thingo with the hope that I might review it here on eigenmagic.com. In summary: Don’t bother. It’s an expensive waste of time. What Even Is It? It’s a couple battery powered, low-power… Read More

I’ve had quite a few conversations about Dell going private since the announcement. Apparently quite a few people read my post about Dell’s strategy and finances, so I figured I should write some sort of update. The last paragraph seems somewhat prescient now, I suppose. By going private, Dell can… Read More

In a somewhat surprising turn of events, I’ll be going to Dell World 2012 in December, as a guest of Dell. I’ll be there as part of the media pool from Australia as the only blogger. It looks like social networking is one of the main themes of the event,… Read More