The DellWorld’15 Solutions Exchange was a fascinating departure from the kinds of show floors I’m used to at recent trade shows.

Instead of a raucous visual cacophony of booths competing for attention, the DellWorld show floor was a relatively sedate affair. Aside from a chosen few, the booths were identical rectangles of space, enclosed by tasteful wood-panelling. There were no fancy kites hanging from the ceiling, no two-level booths with DJs spinning out a high-energy mix, no oddly shaped neon animals pulsing like demented sculptures.

I actually quite liked the panelling effect, present through the conference, as it lent a cultured air to what can often end up as a fairly tacky, plastic look. There were absolutely no booth babes, so as an industry we finally seem to be making some headway on that front.

However, I can only imagine the howls of rage from marketing executives at participating vendors who had to restrain themselves to two logo placards, identical in shape and size to everyone else’s. It made them all look like un-differentiated commodity bins, orderly arranged like so much sand.

The shouting would have been epic.

A handful of anointed princes—Samsung, Microsoft, Intel—were granted leave to show off a little more—a larger space with a hanging display or wood-panelled arch—but everyone else was forced to pay homage to the king.

A part of me finds this hilarious because of how very different this treatment is compared to other shows. Tweaking the nose of self-important executives is lots of fun. Another part of me is concerned that Dell might be becoming too controlling for a company that prides itself on being friends with basically everyone.

Perhaps someone took the “open and standards-based” mantra a little too far?

A few examples below. Sorry about the awful photo quality, but I somehow neglected to take proper photos of the floor during the day. I was too busy laughing. The Dell parts were pretty nice. 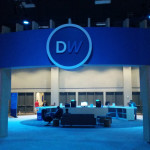 Dell World. All Dell, all the time.